Before Jesus left earth He made a final command: ‘Go then and make disciples of all nations, baptizing them in the name of the Father, the Son and of the Holy Spirit.’  To us, this is an important command, the Great Commission (not the Great Suggestion!), and it is something our Church is a part of both in our community, in our country and right around the world.  As a Church we love to send people onto the mission field for the Good News to be spread, to support those who feel they are called to be a part of a short or long-term mission trip and also partner with organisations who are doing amazing things in the Name of Jesus.

Here are those who we send, support and partner with:

John graduated Commonwealth Bible College in 1962. Together John and Dot planted the AOG Church in Tully and was heavily involved in the Charismatic Renewal from Townsville to Cairns. They moved to Ayr in 1977 to be part of the AOG Church.  John joined Coastlands Ministries as Mobile Maintenance Engineer maintaining missionary yachts and ships 1964 to 2003. With Coastlands Ministries he installed and maintained radio communication networks in Vanuatu.
Since 2004 as a result of the yacht maintenance with Coastlands Ministries he has became involved with Kapuna Rural Hospital and Kikori District Hospital in the  Gulf Province in Papua New Guinea as Pastor, Engineer and Trainers.

Bob & Janine Mann visited us at the same time that we held our Radiant Women’s Conference in June, 2011 and touched our hearts with their ministry in Jaipur, India.  Bob & Janine work in a particular slum containing around 10 thousand people in an area the size of a couple of blocks. There they have helped socially to improve the standard of living for these impoverished people.  In a country made up of casts there is little hope for the future for someone born into this lifestyle. In their time Bob & Janine have established a school, set up a sewing factory, helped to improve personal hygiene and trained many vocationally enabling them to work and make some money.

Doug and Anna Boyle are two amazing people who obeyed God’s call on their lives and took their four boys to Kazakhstan over a decade ago. They were the first western missionaries to enter this former Communist nation and establish a missions outreach which became Teen Challenge Kazakhstan. Over the years Doug & Anna and their team have rehabilitated thousands of Drug Addicts which has resulted in many becoming disciples of Jesus with some becoming Pastors of large churches in places like Russia & Mogal China. Despite the incredible challenges they have faced from kidnappings to robberies and the climate & culture, the Boyles have paid a high price but seen many people come to faith in Jesus Christ.

Our Former Senior Pastors Glenn & Terri-Anne Rogers havecontinued to minister in the Scottish capital Ediburgh. 2011 was incredibly tough with Terri’s mum Anne being diagnosed with bone cancer and their son Josh being diagnosed with lymphatic cancer. After taking on the established Musselburough congregation as well as the inner-city outreach that they had pioneered a decision was made to merge the two congregations as the workload was too much for the team to continue long term all the whilst Glenn & Terri were working full time in secular employment.

In 2011 we joined with the work that Greg & Kim Hart are doing in Mozambique. Greg and Kim have helped establish a school, a church as well as facilitating Bible training for church leaders. One of their achievements is wind up MP3 players that have the Bible in the native languages of the people there which enables them to hear the Gospel in their own tongue without needing to interpret it into their language first. Visit the Harts here, or keep in touch with them on Facebook @Harts for Africa.

Fay Walkling is an amazing lady who has served in Thailand for what seems like forever. Fay has helped to establish 2 orphanages in the north of Thailand along with a number of Churches. Currently she oversees a boys home in Maseriang where her and the house parents educate, house, feed, clothe and disciple for Jesus at times more than 20 young men. Some orphaned, many with no hope in a deeply Bhuddist country that is currently going through social reform with much influence from the west in their younger generation.

Peter & Robyn Patterson are the former Senior Pastors of Sun City Church Townsville handing over the Church to Sri Lankan Cami DeAlmeida so that they could concentrate full time on the mission work they are involved with. Specifically, Peter works with the churches in Sri Lanka where he has been travelling to and ministering for a number of years. Robyn has been instrumental in establishing the Bible training college in Vanuatu on the Island of Sola where Ps Les taught this year. Both have a passion to make disciples and train church leaders to be effective in their ministries.

Ps Philip and Florence Ng run God is Good Church in Iloilo in the Philippines.  Doing extraordinary work in the slums of this city, their team provides rice for the less fortunate while giving them something more important than food, the Good News message of Jesus Christ.  Running multiple service across the week, usually in a tent they erect, this growing church is seeing extraordinary miracles and healings in their services. Each year our church joins a team in Mackay to visit Ps Philip and his team to assist and bless what they’re doing in the Philippines. 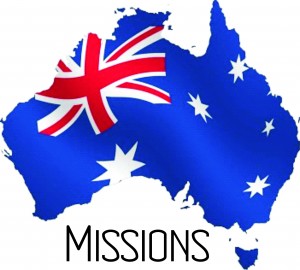 Nev & Isabel Rogers have continued their out back work to Qld & the NT when the wet has allowed. Due to the unusually saturated inland from this years wet they were restricted in access to some places but still continued to visit out back and remote communities and homesteads with their book exchange as well as Installing Optus B2 Satelites so that people can receive Subscription Free christian Television channels.

Warren & Sheena Luscombe continue to Pastor the church at Fitzroy Crossing in Western Australia. Here they work mainly amongst the Indigenous of the area. With a focus to disciple people to faith in Jesus Christ. Warren & Sheena have also done major work on the rundown church building. This year they had a major challenge when their 4WD rolled whilst returning from a visit to Broome. By God’s grace they were all ok except for some minor bumps and bruises. At the beginning of 2012 they held their annual convention where Ps Les was the guest speaker. 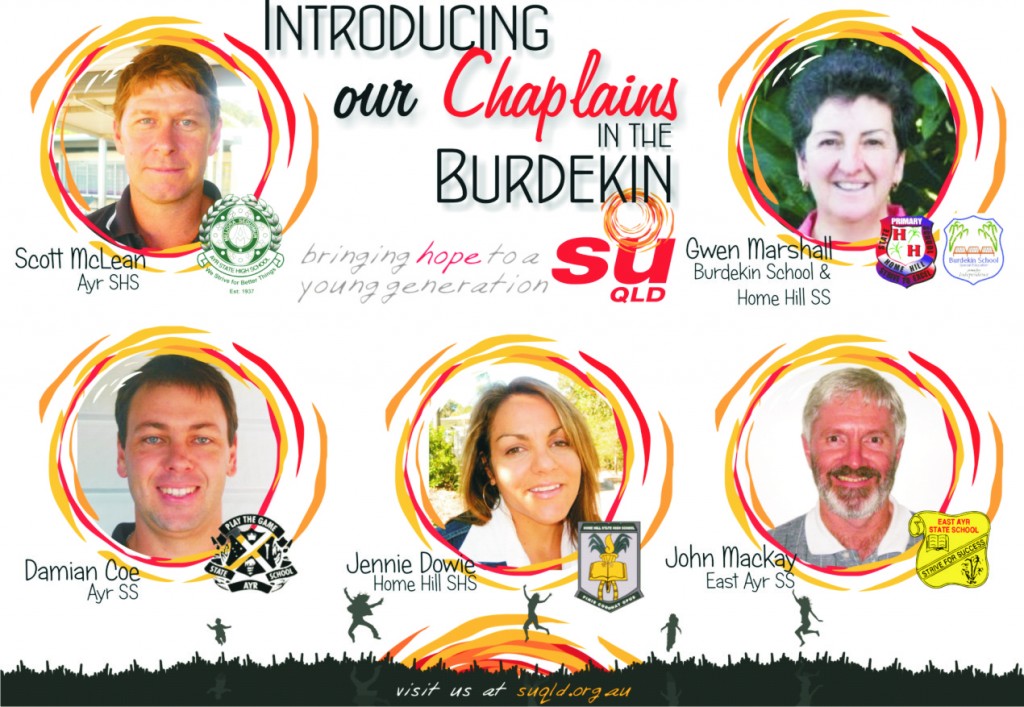 Our School Chaplains are awesome. It has been our privilege to support the ongoing efforts of chappies to make a difference in the lives of the students, teachers and parents from various primary and secondary schools in our district. Our Chappies – Jennie Dowie and Damien Coe face many challenges every week as young people deal with all sorts of issues from dysfunctional families, to abuse, bullying and issues of life and death.

At the beginning of 2011 Queensland was ravaged with some of the greatest floods the state has ever had. Being located in a region where floods are no surprise and we all know how horrific flood waters can be, as a church we were able to partner with ACC International to provide financial and prayer support to our friends, family and churches who were devestated by the floods.

As a church we are proud to partner alongside the amazing work that Red Frogs do.  Giving financial support and also Red Froggers from the Burdekin who every year head to Airlie Beach to walk home, look after, cook panckaes for, support and befriend many school leavers as they celebrate the end of their schooling.

As a church we have had the ability to partner with Wycliffe Bible Translators as they endeavour to translate the Bible into the many languages around the world who still can’t access or read a bible due to the language barrier. 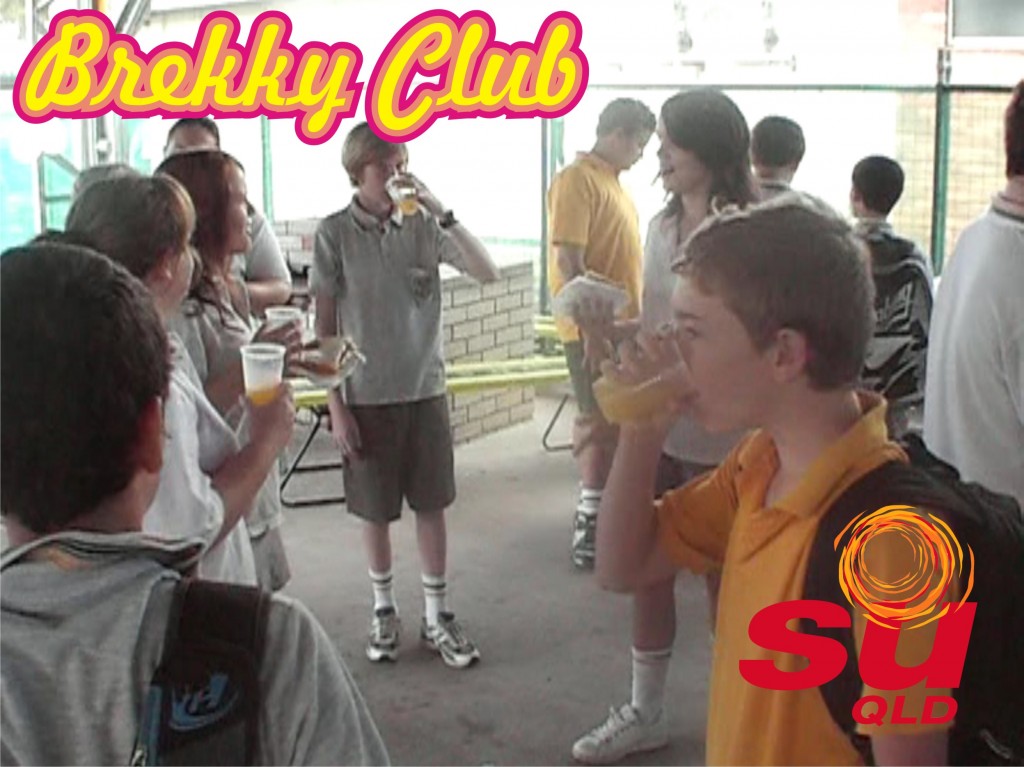 Nothing shows the Love of God like food! As a church we are privleged to partner with our local Chaplains and SU to help put on breakfast for schools in the Burdekin. Once a month our church provides a bacon & egg breakfast for the students and teachers at Home Hill High School.

We know that Christmas time for many is a joyous occasion, however, for some in our community it is a tough few months.  That’s why in 2011 we started our Hamper Handout.  This program in conjunction with a local agaency, allowed us to deliver hampers to those in our community who were doing it tough.  From food, clothes, toys and stationary, these hampers were a blessing to those who needed them most.  Over 100 hampers have been handed out since we have started this program and we look forward to many more hampers being placed in the hands of those who need it in years to come!